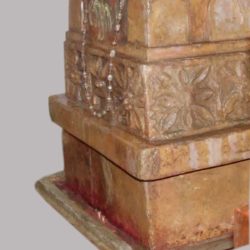 Shri Akshobhya Teertha was the last of Madhvacharya's direct disciples to sit on the Vedanta Pitha. After initiating Akshobhya Teertha into sanyasa Shri Madhvacharya gave him the Deity of Aja-Vithala. (Krsna standing with His hands on His hips, accompanied by Shri Devi and Bhudevi, though some say this is Krsna with Rukmini and Satyabhama).

Shri Akshobhya Teertha who initiated Shri Jaya Teertha (author of Shriman Nyaya Sudha) was a contemporary of the great 'advaitin' Shri Vidyaranya and also of a celebrated 'Visistha-advaitin' scholar Shri Vedanta Desika. Shri Akshobhya Teertha had a scholarly debate with Shri Vidyaranya on the interpretation of the scriptural passage "Tatvam-asi". Extensive and elaborate arguments were exchanged in the presence of Shri Vedantha Deshika who was chosen by both as an arbitrator.

Another tradition says that all the arguments were literally written down and then sent to Shri Vedantha Deshika whose verdict was in favour of Shri Akshobhya Teertha. The epigraphic evidence of this historic victory is on a commemorative pillar of victory on a hill near Mulabagilu that can be seen even today.

How to visit Malkhed?

Malkhed comes under Gulbarga District. It is 40 kms away from Gulbarga. There is sufficient bus facilitiy to Malkhed from Gulbarga. It is situated in between Gulbarga and Sedam, 12 kms from Sedam.